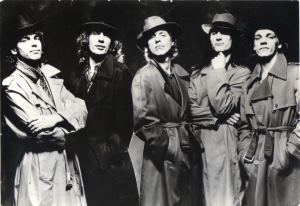 This band was formed with experienced musicians, both on stage and in the studio. The name is self explanatory and the band plays a lot of covers from the 60s and 70s that have influenced their careers. The band performs on a regular basis in Germany and The Netherlands. In 1991 the self titled album Undercover was released, solely consisting of cover songs. In 1992 the second album All Lined Up is released, containing their own material. Both albums were recorded and produced by Dick Kemper.

• Undercover
• All lined up